Final course of the 2014/15 season with the Cheshire Active Naturalists (CAN).

Tom’s car going through some stuff so we traveled in it only as far as Fleur’s where we switched to her mini and bombed off to Knutsford this Sunday morning. The venue was Cottons Hotel & Spa which Tom and I in particular have come to love thanks to it’s comfy seats and complementary coffee, boiled sweets and mechanical pencils. It doesn’t get much better than that.

It seemed fitting that the final course of the season was to be lead by Rachel. In the two years I’ve been a member of CAN Rachel has been chair and events organizer, present at most of the events I’ve attended. But this was the first one I’ve been on that she’s lead and we’d been looking forward to it.

One of the good things about CAN is that you get a real mix of course types. Some are things I might not have considered investigating if there wasn’t a course running, like harvestmen or diptera. Others are full on industry specific, work skills stuff, like the GCN courses I completed in my first year which lead to me getting my newt licence.

This Phase 1 course was like that. If you know anything about ecology consultancy work you know that being able to deliver a good Phase 1 Habitat Survey is a string for your bow that’s well worth working at. I have some experience of Phase 1s. Not enough to go out and do one on my own professionally yet but enough to understand the size of task you’re facing when you decide to pursue it as a skill.

A couple of years ago I attended the FSC introduction to Phase 1 surveys, lead by Johnny Stone at Flatford Mill. That was back when I had a habit of arriving at courses convinced I would leave an expert in whatever it was on. You’d think I’d have learned my lesson after Using a Flora. Among the things I learned on the FSC course was that Phase 1s are not a set of facts to learn and then apply. It’s more like learning a language than a list of rules. And like learning a language its something that improves with practice and is best learned by learning from those already proficient in it.

So the FSC course was a start. I’ve shadowed colleagues on surveys since then and each time you learn another little trick or fact that informs your understanding of the process a little more.

This CAN course was essentially a chance to gain more tips, more advice, from someone who’s been doing them professionally for 14 years. Attending were people who were absolute beginners, experienced ecologists who conduct the surveys regularly, and people like me with a little knowledge looking for more.

We spent six hours discussing the main habitat types as featured in the ‘JNCC Handbook for Phase 1 habitat survey’ and what defines them. Things to watch out for. Things to make your life easier. The handbook is available as a pdf here: http://jncc.defra.gov.uk/PDF/pub10_handbookforphase1habitatsurvey.pdf 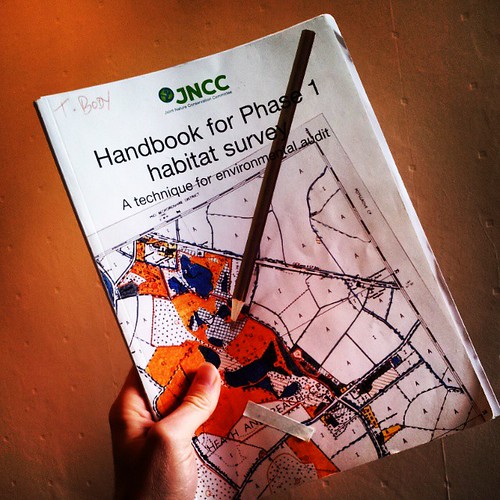 I’m a fan of the Phase 1 process. I like how it enables communication about the features of large expanses of habitat. Some people don’t like the fact that the process necessitates as they see it the pigeon-holing of dynamic environments which cannot neatly defined as one thing and not another. Personally I think they’re missing the point. The Phase 1 acknowledges its flaws. It knows that habitats are dynamic and enigmatic. It is objective. You classify habitats objectively and you interpret reports objectively. The result is a level of communication between ecologists, developers and legislators that isn’t possible by other existing means.

The key to this, like so many things is not to see the learning process as having an end. There is always going to be a useful tip someone can give you to improve your method. This course provided me with loads of useful info which now adorns the margins and spaces of my handbook ready for future me to rediscover it on a rainy day in a field somewhere… 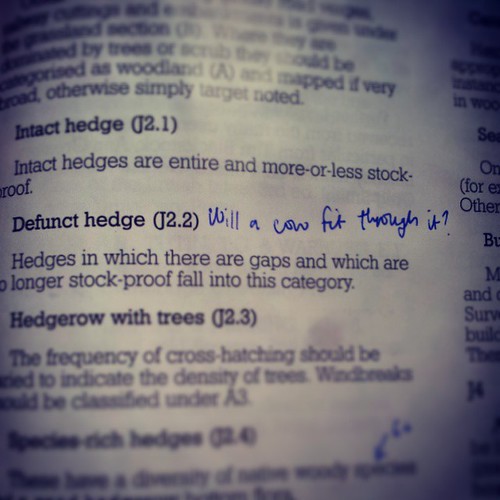 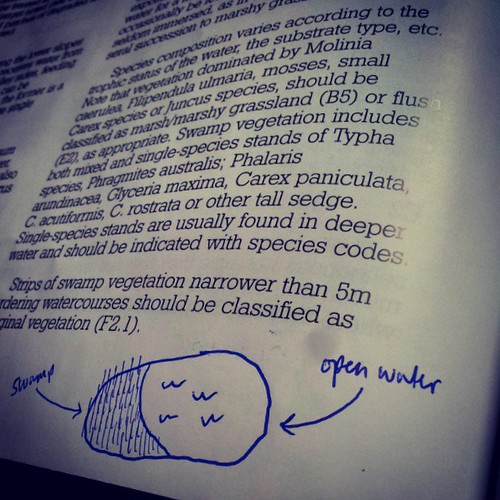 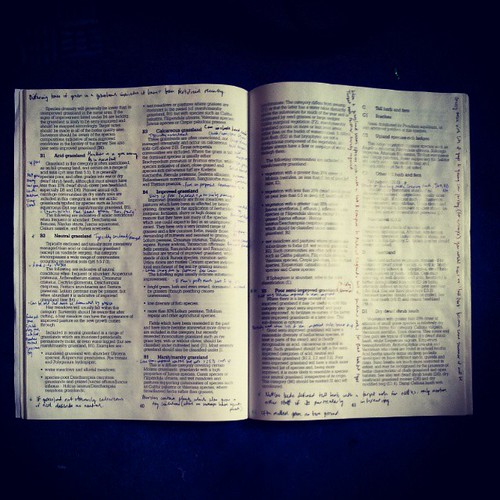