This year we’ve been keeping a record in the office of all the different things we encounter while on the job. There are are lists for birds, plants, mammals, herptiles, moths & butterflies, and poo. Something can only be entered on the list once, there are no winners (because if there were, Simon would thrash everyone and it’d be no fun), we just want to see how much we see in a year between the 10ish of us.

It has the pleasant effect of turning every job, even the potentially dull ones, into a potential new find. Today I paid a visit to a waste water treatment works we surveyed for great crested newts last year which still has some fencing in place, to inspect the fence and check it was still a functional barrier. The filter beds with their revolving sprinklers attract birds in large numbers, who feed off the insects which the beds attract. Each round circular bed has a ring of wires leading from a central pole to the rim. Today the wires were bedecked in carrion crows giving them the appearance of macabre big-tops. Pied wagtails ran around on the stones below them. Some old, now defunct, beds have long overgrown with bramble scrub. A tree sparrow observed and chastised me from above as I walked past, and I caught a glimpse of a rabbit’s bottom disappearing into the thicket.

When I reached the fence line I started my perimeter walk and out of habit rather than necessity I turned over some of the left over carpet tiles, remnants of the bucket traps and carpet tile trapping surveys of last summer. Earth worm heads flinched back down their holes and centipedes flowed over and under stones or clods of earth. The contracted bodies of many slugs clung to the underside of the tiles but there was little else under the mats yet. The myriad of beetles were still absent.

Under an old plastic panel lying on the ground I watched a field vole zoom through its exposed labyrinth of tunnels in the damp, yellow grass. Then, under a tile I found two frogs and toad.  All three appeared still to be in a torpid state and I gently placed the mat back down. I returned to the mat a few minutes later having considered it and decided to move them. Ordinarily I wouldn’t disturb animals in this state but as they were on the wrong side of the fence it wasn’t right to leave them there. So I fetched an empty bucket, lined it with vegetation and placed them in.

I have a fondness for all wildlife, but I love toads. I genuinely love them, they illicit an emotional response in me that other animals don’t. When I look at a toad I get the feeling you get when you run into a really good friend. I can’t help but anthropomorphize them they just have such wonderful faces. This was my first toad of the year and my day was instantly made by finding it and I handled her with the usual care, plus a little extra due to her docile (even by a toad’s standards), dozy condition. 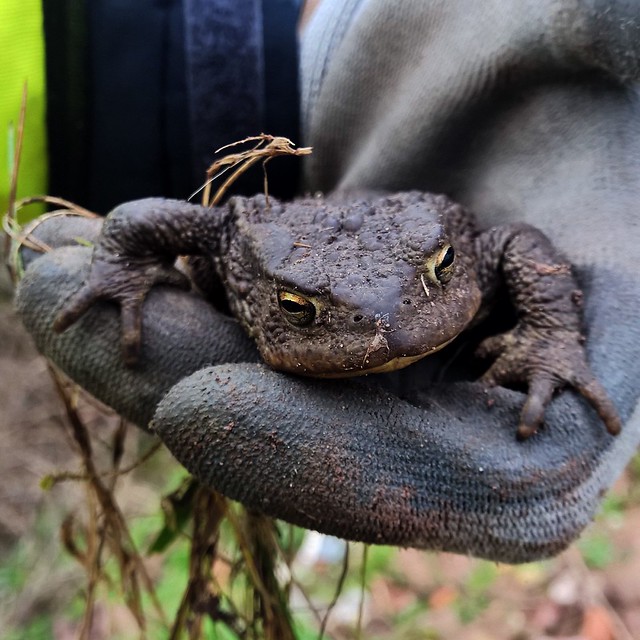 I don’t anthropomorphize frogs. They exude wildness. Reflexive, instinct driven, dynamic and slightly repellent in their curiousness. If you pick up a frog they throw in everything they have to kick, leap and headbutt their way out of your hands. These two took only a moment to come to life and become alert and escape driven.

I placed them in the hibernacular, constructed for  surveys last year and carried on, finding no more. Towards the end of my walk a buzzard dropped from a nearby tree, in that heavy fall then suddenly weightless swoop of theirs. Jackdaws yapped their disapproval and song thrush and blackbirds went about their business along the field margin. I wondered if I’d seen a raven, sat up a tree on the other side of the site, but it was just another crow. I scanned along the tree line through my binoculars and was rewarded with the sight of a male kestrel, glowing almost pink in the afternoon sun. I followed him as he flew from his tree, over the field I stood in and hung in the sky, treading air above me for a half a minute before going on its way.

Frog, toad and field vole all firsts for the work list. Not bad for an hour’s fence check. 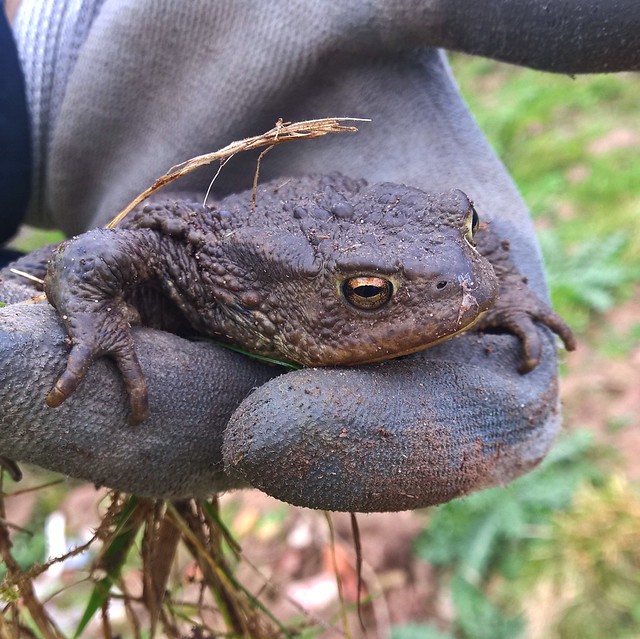